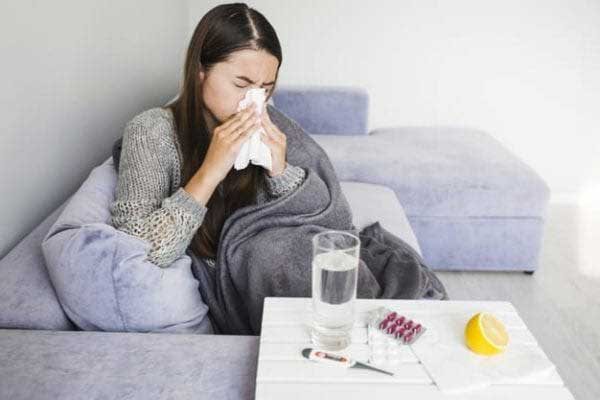 Studies have shown that people who are sensitive, already suffer from allergies, asthma, or compromised immune systems and occupy damp or moldy buildings are at an increased risk of health problems such as inflammatory and toxic responses to mold spores, metabolites, and other components. The most common health problem is an allergic reaction. Other problems are respiratory and/or immune system responses including respiratory symptoms, respiratory infections, exacerbation of asthma, and rarely hypersensitivity pneumonitis, allergic alveolitis, chronic rhinosinusitis, and allergic fungal sinusitis. Severe reactions are rare but possible. A person’s reaction to mold depends on their sensitivity and other health conditions, the amount of mold present, length of exposure and the type of mold or mold products.

Some molds also produce mycotoxins that can pose serious health risks to humans and animals. The term “toxic mold” refers to molds that produce mycotoxins, such as Stachybotrys chartarum, not to all molds. Exposure to high levels of mycotoxins can lead to neurological problems and in some cases death. Prolonged exposure, e.g., daily workplace exposure, can be particularly harmful. The five most common genera of indoor molds are Cladosporium, Penicillium, Aspergillus, Alternaria, and Trichoderma. Damp environments which allow mold to grow can also produce bacteria and help release volatile organic compounds.

Infants may develop respiratory symptoms as a result of exposure to a specific type of fungal mold, called Penicillium. Signs that an infant may have mold-related respiratory problems include (but are not limited to) a persistent cough and/or wheeze. Increased exposure increases the probability of developing respiratory symptoms during their first year of life. Studies have shown that a correlation exists between the probability of developing asthma and increased exposure to Penicillium. The levels are deemed ‘no mold’ to ‘low level’, from ‘low’ to ‘intermediate’, and from ‘intermediate’ to ‘high’.

Mold exposures have a variety of health effects depending on the person. Some people are more sensitive to mold than others. Exposure to mold can cause a number of health issues such as; throat irritation, nasal stuffiness, eye irritation, cough, and wheezing, as well as skin irritation in some cases. Exposure to mold may also cause heightened sensitivity depending on the time and nature of exposure. People at higher risk for mold allergies are people with chronic lung illnesses, which will result in more severe reactions when exposed to mold.

There has been sufficient evidence that damp indoor environments are correlated with upper respiratory tract symptoms such as coughing and wheezing in people with asthma.

Among children and adolescents, the most common health effect post-flooding was lower respiratory tract symptoms though there was a lack of association with measurements of total fungi. Another study found that these respiratory symptoms were positively associated with exposure to water-damaged homes, exposure included being inside without participating in the cleanup. Despite lower respiratory effects among all children, there was a significant difference in health outcomes between children with pre-existing conditions and children without. Children with pre-existing conditions were at greater risk that can likely be attributed to the greater disruption of care in the face of flooding and natural disaster. Health effects in children and adolescents with chronic risk were also found to be at an increased risk of adverse outcomes following a natural disaster including diabetes, asthma, chronic lung disease, allergies, HIV/AIDS, other immune disease, heart defects, cystic fibrosis, depression, seizure disorders, Sickle Cell disease, kidney failure, and liver failure.

Although mold is the primary focus post flooding for residents, the effects of dampness alone must also be considered. According to the Institute of Medicine, there is a significant association between dampness in the home and wheeze, cough, and upper respiratory symptoms. A later analysis determined that 30% to 50% of asthma-related health outcomes are associated with not only mold but also dampness in buildings. Another health effect associated with dampness and mold is Sick Building Syndrome (SBS), which is defined by manifestations of symptomatic illness as a result of poor indoor air quality and pollutant exposures. Signs of potentially illness-causing buildings include condensation on the windows, high humidity in the bathrooms, a moldy odor, or water leakage.

While there is a proven correlation between mold exposure and the development of upper and lower respiratory syndromes, there are still fewer incidences of negative health effect than one might expect. Barbeau and colleagues suggested that studies do not show a greater impact from mold exposure for a number of reasons: 1) the types of health effects are not severe and are therefore not caught; 2) people whose homes have flooded find alternative housing to prevent exposure; 3) self-selection, the healthier people participated in mold clean-up and were less likely to get sick; 4) exposures were time-limited as result of remediation efforts and; 5) the lack of access to health care post-flooding may result in fewer illnesses being discovered and reported for their association with mold. There are also certain notable scientific limitations in studying the exposure effects of molds on individuals because there are currently no known biomarkers that can prove that a person has been exposed to molds. Thus, it is currently impossible to prove the correlation between mold exposure and symptoms.

Health problems associated with high levels of airborne mold spores include allergic reactions, asthma episodes, irritations of the eye, nose, and throat, sinus congestion, and other respiratory problems, although it should be noted that mold spores won’t actually cause asthma, just irritate existing conditions. For example, residents of homes with mold are at an elevated risk for both respiratory infections and bronchitis. When mold spores are inhaled by an immunocompromised individual, some mold spores may begin to grow on living tissue, attaching to cells along the respiratory tract and causing further problems. Generally, when this occurs, the illness is an epiphenomenon and not the primary pathology. Also, mold may produce mycotoxins, either before or after exposure to humans, potentially causing toxicity.

Further information: Mycosis. A serious health threat from mold exposure for immunocompromised individuals is the systemic fungal infection (systemic mycosis). Immunocompromised individuals exposed to high levels of mold, or individuals with chronic exposure may become infected. Sinuses and digestive tract infections are most common; lung and skin infections are also possible. Mycotoxins may or may not be produced by the invading mold.

Dermatophytes are the parasitic fungi that cause skin infections such as athlete’s foot and tinea cruris. Most dermatophyte fungi take the form of a mold, as opposed to a yeast, with appearance (when cultured) that is similar to other molds. Opportunistic infection by molds such as Penicillium marneffei and Aspergillus fumigatus is a common cause of illness and death among immunocompromised people, including people with AIDS or asthma.

Hypersensitivity may also be a reaction toward an established fungal infection in allergic bronchopulmonary aspergillosis.

Molds excrete toxic compounds called mycotoxins, secondary metabolites produced by fungi under certain environmental conditions. These environmental conditions affect the production of mycotoxins at the transcription level. Temperature, water activity, and pH, strongly influence mycotoxin biosynthesis by increasing the level of transcription within the fungal spore. It has also been found that low levels of fungicides can boost mycotoxin synthesis. Certain mycotoxins can be harmful or lethal to humans and animals when exposure is high enough.

Extreme exposure to very high levels of mycotoxins can lead to neurological problems and in some cases death; fortunately, such exposures rarely to never occur in normal exposure scenarios, even in residences with serious mold problems. Prolonged exposure, such as daily workplace exposure, can be particularly harmful. The health hazards produced by mold have been associated with sick building syndrome, but no validated studies have been able to demonstrate that normal indoor exposures to these common organisms pose a significant threat.

It is thought that all molds may produce mycotoxins and thus all molds may be potentially toxic if large enough quantities are ingested, or the human becomes exposed to extreme quantities of mold. Mycotoxins are not produced all the time, but only under specific growing conditions. Mycotoxins are harmful or lethal to humans and animals only when exposure is high enough, as with absolutely all other substances.

Mycotoxins can be found on the mold spore and mold fragments, and therefore they can also be found on the substrate upon which the mold grows. Routes of entry for these insults can include ingestion, dermal exposure, and inhalation. Some mycotoxins cause immune system responses that vary considerably, depending on the individual. The duration of exposure, the frequency of exposure and the concentration of the insult (exposure) are elements in triggering immune system response.

Aflatoxin is an example of a mycotoxin. It is a cancer-causing poison produced by certain fungi in or on foods and feeds, especially in field corn and peanuts.

Originally, toxic effects from mold were thought to be the result of exposure to the mycotoxins of some mold species, such as Stachybotrys chartarum. However, studies are suggesting that the so-called toxic effects are actually the result of chronic activation of the immune system, leading to chronic inflammation. Studies indicate that up to 25% of the population have the genetic capability of experiencing chronic inflammation to mold exposure, but it is unknown how many actually experience such symptoms due to frequent misdiagnosis. A 1993–94 case study based on cases of pulmonary hemorrhage in infants in Cleveland, Ohio originally concluded there was a causal relationship between the exposure and the disease. The investigators revisited the cases and established that there was no link to the exposure to S. chartrum and the infants in their homes.[citation needed]

The common house mold, Trichoderma longibrachiatum, produces small toxic peptides containing amino acids not found in common proteins, like alpha-aminoisobutyric acid, called trilongins (up to 10% w/w). Their toxicity is due to absorption into cells and production of nano-channels that obstruct vital ion channels that ferry potassium and sodium ions across the cell membrane. This affects in the cells action potential profile, as seen in cardiomyocytes, pneumocytes and neurons leading to conduction defects. Trilongins are highly resistant to heat and antimicrobials making primary prevention the only management option.